What could it possibly mean to be a ‘Spiritual Atheist’? I’ll admit, I’m unsure myself. Which brings us to the point: discovery. Personal, of course. Public, obviously.

I believe in the existence of the Soul. I also believe that there is no supreme being worthy of our worship. Whence then, the Soul? I reject the notion that a creator God is required to endow its creations with the condition of Soul. I see nothing in the universe that precludes the possibility that Soul is a material thing, however I have no evidence other than personal conviction.

I like to say that “Art is the only acceptable proof of the existence of the Human Soul.” I am possessed of enough hubris to hope that this quote becomes attached to my name so it will probably be repeated and doubtless this page will contain examinations of Art and their relationship with faith, reason and spirituality. I hope to develop the idea of Art as Proof of Soul into something coherent and expressable in more than just a pithy sentence.

There will also be reviews of books and television and news articles. I’m going to explore philosophies both Western and Eastern while I develop my own thought process. This blog is probably going to be boring for a while and may ultimately end up not being anything. I’ve failed at blogs before.

Let’s give it a shot though. Let’s move forward into this idea of Spiritual Atheism and see if we can’t learn something about ourselves.

Dwelling in the Mountains

Gather a group of artists together and ask them which of their arts is the ‘Greatest’. There are arguments for each, personally I’d like to hand the title to Theatre: the addition of temporal impermanence to collaborative aesthetic achievement elevates the medium. I’d be willing to listen to arguments from the other muses, though.

Painting, I’m sure, would have its vociferous supporters. The very permanence that is impossible in theatre giving painting its gravitas. It’s a compelling argument. Though I’ve never visited the caves at Lascaux to see the seventeen thousand year old paintings of Aurochs the place captures my imagination. We don’t know what compelled Paleolithic artists to crawl deep into the earth with lanterns of Juniper and paint on stone. One 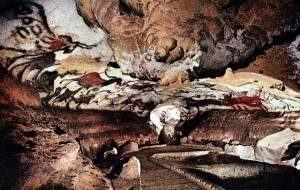 theory, which I find particularly compelling is advanced in verse and prose in  Juniper Fuse: Upper Paleolithic Imagination & the Construction of the Underworld by Clayton Eshleman. His theory is the need to paint these images arose from the psychological discomfort experienced as men and women first began to understand themselves as somehow Different from Nature.

The images are there, exactly – or nearly exactly – as they were painted, argues the painter. Their permanence gives them a power that theater or other temporally experienced arts could never hope to have. And it’s a fair argument. Without having been to the caves I can only speak to a feeling that it is also an appreciation of what the artists actually went through to achieve their work that gives the cave-art such intense power. I have seen petroglyphs carved into stones on the Isla Ometepe in Nicaragua. I will admit to being underwhelmed.

Poetry then. Have the poets been sitting there quietly confident theirs is the greatest of the arts? Capable of being both permanent and immediate, arguably the oldest (what would the first campfire stories have been but the first poems?); its practitioners the most admired. It wasn’t a painter who Dante chose to accompany him into Hell in The Divine Comedy. Shakespeare, the poet, is the greatest writer of my beloved theatre.

I find myself generally unable to speak to poetry. It’s an art form that has proved elusive to me, both in terms of practice and enjoyment. I find the writing of poetry generally impossible – I have no perspective on it. With other forms of writing I can identify the flaws, I know generally where I’m going wrong. For example, this blog is wordy and occasionally pedantic. The ideas don’t flow naturally from one another. It’s clearly not writing that’s been polished. With poetry I’m utterly lost, I can’t tell if it’s good or terrible. I have a basic understanding of the tools of a poet, meter, rhyme, little tricks like enjambment, those things I learned doing a degree in Creative Writing, but the exercise I find excruciating.

I do have, though, a favourite piece of poetry.

That it comes from the Eastern tradition is maybe not surprising for a blog called the Dao of Atheism. Hsieh Ling-yun was a 5th century CE Chinese poet. He is one of the key members of a tradition of Chinese poetry called “Rivers and Mountains” poetry. This poetry is concerned, obviously, with nature, living in nature and identifying one’s place in it. It could be considered, in some way, an heir to the tradition possibly begun in prehistoric caves. Humankind attempting to use art to understand their role in the universe.

There is a beautiful translation of Hsieh Ling-yun’s poetry by David Hinton: The Mountain Poems of Hsieh Ling-yun, published by New Directions. In it, Hinton makes use of ellipses (…) to indicate lacunae in the text. Lacunae being sections of a manuscript either missing or rendered illegible by the passage of time.

Midway through the lengthy prose poem Dwelling in the Mountains Ling-Yun describes what he sees around him in the mountains:

Here is where I live,
lakes on the left, rivers on the right,
you leave islands, follow shores back

to mountains out front, ridges behind.
Looming east and toppling aside west,

they harbor ebb and flow of breath,
arch across and snake beyond, devious

Ling-yun then goes on to list what he sees nearby in each of the four cardinal directions, then moves to what he sees far away. After a poetic listing of mountains with names like “Halcyon-Knoll” and “Boundless-Peace” and descriptions of ponds and streams and lakes we find the following passage:

Perhaps the typographer (Sylvia Frezzolini Severance) is due some of the credit, but that ellipses is so striking and dramatic that it never fails to excite me. The pregnant possibilites inherent in absence. What is far off in the west? Ling-yun will forever be silent. It is, without a doubt, my favourite piece of poetry.

So what on earth does it have to do with spiritual atheism?

The ravages of time have erased whatever existed far off in the west. Accident, mould, fire, a missing page who knows what could have erased those words from our memory. The pure atheist would conclude that it was accident, beautiful accident to be sure, but accident none the less. This person would say that the beauty in the interplay of impersonal forces, time and poetry exists entirely in my own mind. It is I, the viewer who perceives something in this fabulous accident that I find moving and pleasing.

What, then, do I conclude? I’m forced to admit that I don’t have any conclusions. I have no argument against my atheist friend and indeed agree with most of their suppositions. It is the beautiful accident that I find so compelling, and I do enjoy it subjectively. You may not, I may be the only person who isn’t disappointed by the loss of whatever was far off in the west. I certainly don’t ascribe purpose to the flow of time. I don’t believe that the universe conspired to bring me or anyone else this passage of poetry.

None the less, it moves me. It moves me in a way that I can’t ascribe any material cause to. And what moves me so much about it is the interplay of utterly impersonal forces – the cold and indiscriminate universe – with the directed and concerted artistic effort of one Chinese poet who lived more than a millennia and a half before my birth. I love the universe deeply, it’s a place that is so much bigger and more exciting than any religion could ever have hoped for. It operates on scales that are literally impossible to contemplate. And yet it also operates, impersonally, coldly, on this level which brings happiness to one being who, depending on your field, is either a self-ambulating electro-chemical reaction or a collection of probability waves. In that I find there to be a seed which IS worthy of the worship I deny to the idea of a creator god.